Someday a pandemic will come along which will be that serious, but as far as COVID-19 is concerned, fear of the virus has been even worse than the virus itself

If the elite really do intend to use COVID-19 to fundamentally transform our society, they are going to need to continue to find ways to make it sound a lot more scary than it really is.

Over the past couple of weeks, we have been endlessly barraged with news stories that boldly declare that “the second wave” is here, and now we are being told that this coronavirus is “10 times more infectious” than it was when it first started spreading in China.

And we are also being told that COVID-19 “causes infected human cells to sprout tentacles loaded with viral venom to help it spread around the body”.

Alex joins the War Room to discuss epic news about the coronavirus hoax!

All of that definitely sounds quite frightening, and over the past couple of weeks a lot of people have really been freaking out as the number of confirmed cases has surged.

But it has become clear that this virus is not going to kill more than 50 million people like the Spanish Flu pandemic of 1918 to 1920 did.

So far, the death toll from this virus has surpassed half a million, and more will keep dying every day.  However, we need to keep in mind that millions of people die from various diseases every single year.  According to the WHO, the flu kills between 290,000 and 650,000 people each year, but we don’t shut down everything because of that.

Yes, COVID-19 is more serious than the flu.  But there is absolutely no reason that it should be paralyzing our society at this point.

If millions upon millions of people were suddenly dropping dead all over the globe, avoiding this virus would be a matter of survival.  That is not the scenario that we are currently facing, and we need people to understand that.

Someday a pandemic will come along which will be that serious, but as far as COVID-19 is concerned, fear of the virus has been even worse than the virus itself.

Sadly, the mainstream media continues to drum up more fear every chance they get.  For example, the following is from a Washington Post article that discussed how a mutant form of COVID-19 has now become the dominant strain here in the U.S. and around the rest of the globe…

When the first coronavirus cases in Chicago appeared in January, they bore the same genetic signatures as a germ that emerged in China weeks before.

But as Egon Ozer, an infectious-disease specialist at the Northwestern University Feinberg School of Medicine, examined the genetic structure of virus samples from local patients, he noticed something different.

A change in the virus was appearing again and again. This mutation, associated with outbreaks in Europe and New York, eventually took over the city. By May, it was found in 95 percent of all the genomes Ozer sequenced.

According to the Daily Mail, scientists are telling us that as a result of this mutation COVID-19 “appears to be approximately 10 times more infectious” than when it originally appeared…

A genetic mutation which scientists around the world have been picking up on for months appears to have caused this spike to be less likely to snap, and also to force the coronaviruses to produce more of them to make itself more infectious.

As a result the virus appears to be approximately 10 times more infectious than it was when it first jumped to humans in China at the end of the year, scientists say.

If I didn’t know better, I would definitely be deeply alarmed to read something like that.

And the World Health Organization is now saying that “the worst is yet to come” for this pandemic….

It’s been six months since the World Health Organization declared the coronavirus outbreak a global health emergency, but on Monday it told the world to prepare for the “long haul” ahead.

“The worst is yet to come,” WHO’s director-general, Tedros Adhanom Ghebreyesus, said on a call with reporters from Geneva. “I’m sorry to say that. But with this kind of environment and condition, we fear the worst.”

Now that this virus has spread all over the planet, there is zero chance of containing it.  Eventually, almost everyone will be exposed to this virus, and a lot of people will not be able to fight it off successfully.

But of course the same thing could be said about the flu.  One of more strains of the flu will sweep across the world this year, and hundreds of thousands of people will die.

Yes, we will be facing a truly catastrophic pandemic at some point, but this is not it.

In a newly released article, Ron Paul does a great job of summarizing the hysteria that we are currently witnessing…

Unfortunately our mainstream media is only interested in pushing the “party line.” So the good news that millions more have been exposed while the fatality rate continues to decline – meaning the virus is getting weaker – is buried under hysterical false reporting of “new cases.”

Unfortunately many governors, including our own here in Texas, are incapable of resisting the endless lies of the mainstream media. They are putting Americans again through the nightmare of forced business closures, mandated face masks, and restrictions of Constitutional liberties based on false propaganda.

In Texas the “second wave” propaganda has gotten so bad that the leaders of the four major hospitals in Houston took the extraordinary step late last week of holding a joint press conference to clarify that the scare stories of Houston hospitals being overwhelmed with Covid cases are simply untrue. Dr. Marc Boom of Houston Methodist said the reporting on hospital capacity is misleading. He said, “quite frankly, we’re concerned that there is a level of alarm in the community that is unwarranted right now.”

The more the mainstream media keeps spreading unwarranted fear, the more people will be afraid of resuming their normal activities.

For example, one recent survey found that 64 percent of Americans are “uncomfortable” returning to church because of this pandemic…

The American Enterprise Institute conducted a poll of 3,504 Americans from late May to early June, asking them about their comfort levels on returning to church.

Needless to say, this pandemic also continues to paralyze economic activity, and we continue to see more than a million Americans file new claims for unemployment benefits every single week.

If our society cannot handle a pandemic that kills hundreds of thousands of people, what in the world is going to happen when a pandemic comes along that kills tens of millions?

The good news is that COVID-19 didn’t turn out to be as bad as some of the experts were originally projecting, but don’t allow that to lull you into a false sense of security.

This pandemic turned out to be mostly fear, but it is just a matter of time before a much more deadly bug hits us. 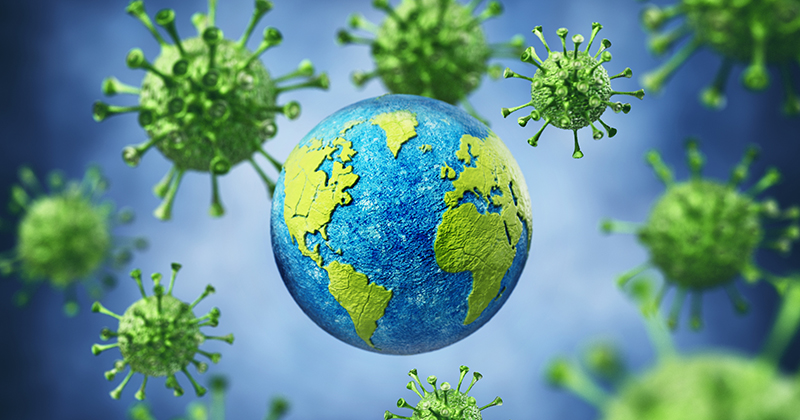 Now They Are Trying To Tell Us That COVID-19 Is “10 Times More Infectious” Than It Was At The Beginning Of The Pandemic
Someday a pandemic will come along which will be that serious, but as far as COVID-19 is concerned, fear of the virus has been even worse than the virus itself
0
0
0
0
0
0
0
0
0
0
0